﻿The Emerald Isle is the home of many things. Until 2015 however, roller coasters were not amongst them. Many are aware though that potatoes certainly are. Tayto is the country's famous crisp brand, as omnipresent in Irish supermarkets and newsagents as Dairy Milk is in the UK. Their main factory is located in rural Meath, about 30 minutes from central Dublin by car. They've had a factory tour for a while now, and began to build a small play area and a zoo a few years ago. You can imagine the surprise then when this small tourist attraction announced they would be building a number of major theme park rides on their property, the centrepiece being a large wooden roller coaster built by the Gravity Group of the USA.

In addition to the coaster there are currently two intense flat rides both from Zamperla: a very enjoyable Air Race and a massive but rather lame Discovery Revolution. There is also a 5D cinema built by SimWorx, which shows a reasonably long and enjoyable Angry Birds movie (it really milks the old shoot-you-in-the-face-with-water trick, I must’ve got sneezed on by grumpy pigs four or five times in the ten minute show). I wouldn’t quite call the place a full-sized theme park yet, but it could well be in a few years: by the looks of it, this year or next will see a Zamperla Power Surge being installed, as the gondolas and one of the ride arms were very visible round the back of the cinema.
One of the most appealing things about the park was everyone's infectious happiness, especially the kids: the excitement to ride and the praise afterwards was clear and loud. Part of this of course is because of the drought of attractions of any size in the country, but I think a great deal is simply down to how good the ride is. The park certainly wasn't busy, but each ride had just enough of a queue that there were very few empty seats on any circuit. 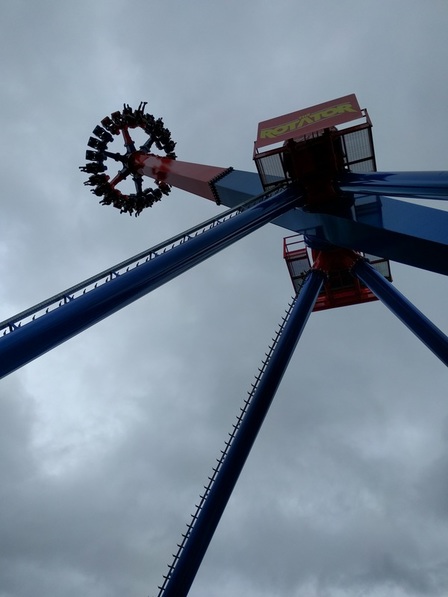 The ingeniously named Rotator (kind of rhymes with potato, geddit?), a Discovery Revolution model from Zamperla, looks the part but is a bit sappy
Cú Chulainn

So: what’s in a name? Well in this case as an uncultured Brit I didn’t really know. Cú Chulainn (pronounced COO Cuh-lenn or almost COO-huh-lenn I believe, although I’m very happy to be corrected on that) is in fact an Irish mythological hero who is the son of a God. A large statue of him towers over the entrance to the queue and his plastic bust with flowing golden locks of plastic hair sits at the front of the train.
It is worth clearing up a few of the incorrect claims about the roller coaster that were originally reported in the press; I don't think these were intentionally misleading, but they have led to a little confusion. The two major claims were that the ride would be Europe's largest wooden roller coaster, and then less ambitiously that it would be Europe's largest wooden roller coaster with an inversion. Firstly there are no other wooden roller coasters in Europe with inversions; going upside down is still a fairly new thing on woodies, so if it did have inversions it would be the largest and only. However, the ride does not even have any inversions, so the claim is completely moot. There is an overbanked turn where the train passes the vertical mark, which is presumably from where the idea originates. Although there is debate as to how far over you have to be to be inverted, most would claim it would be somewhere between 135 and 180 degrees (180 being completely upside down), not barely 90 degrees. The second claim is odd, in no small part because it's unclear whether 'largest' means fastest, tallest or longest. In any case it's not true; Colossos at Heide Park is the tallest wooden coaster in the world and is considerably faster and longer than Cú Chulainn, and in fact there are a few others that are either faster, taller or longer. But statistics a ride do not maketh (Shakespeare anyone?). 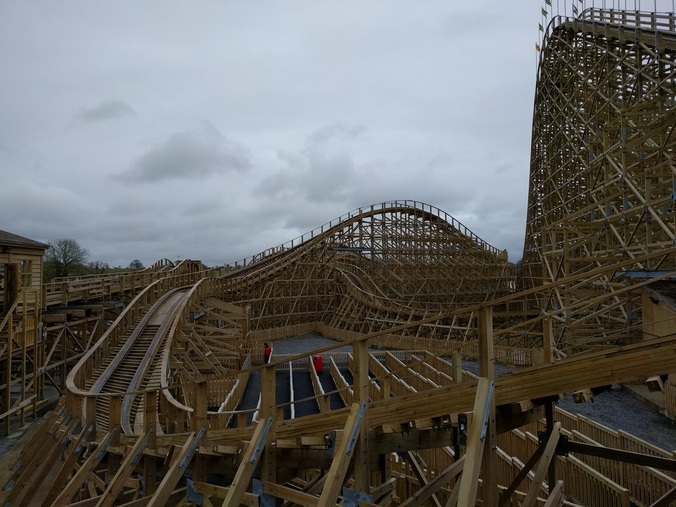 Once settled in your very comfy Timberliner trains (Gravity Group’s signature very exposed ride vehicles, which have a large lap bar spanning your stomach), the train takes a left turn and heads up the 105 ft lift hill. The first drop doesn’t look like much in the on-ride video, but it’s exceptional, especially in the back, and at the bottom you hit the ride’s top speed of 56 mph. From this point you barely go above half the height of the lift hill, and so the whole circuit is taken very quickly. Despite this, there’s still a good minute of coaster track from the crest of the lift to the brakes. Next is a tiny little airtime hill which launches you out of your seat before the train bounces up to a slower turnaround. Down the train dives again, into some lateral twisting turns before it races up into the near-inverting overbanked turn. This is particularly terrifying because the cat walks that run either side of the track obviously don’t bank with it (as the maintenance team wouldn’t be able to walk on them), and so there is a wooden hand rail right by your face as you go past 90 degrees to the ground. The train flies over another hill, at what is probably the second highest point of the ride before going through a figure eight of banked turns and small airtime hills. There’s a small trim brake on the penultimate hill before the very final brake run. 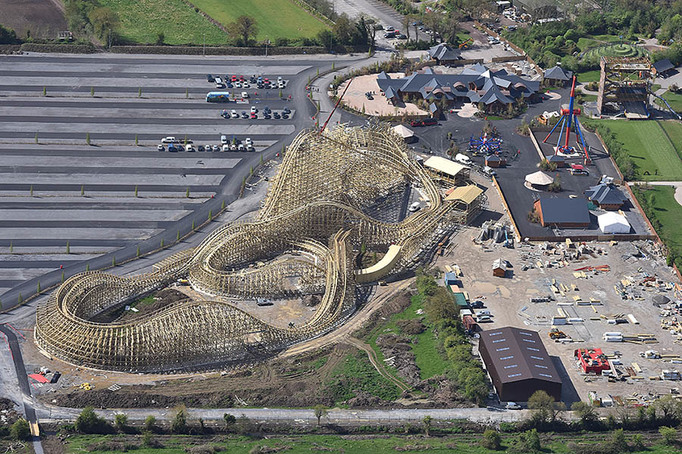 This overview of the park gives a sense of how low to the ground the coaster is after the first drop Image © Evoke.ie
How it ranks

The first thing the taxi driver asked me as I headed back to the airport was how it compared to rides in the UK, and it's an interesting question. A large wooden roller coaster does not mean the same thing as a large steel roller coaster, since steel coasters can be built over twice as tall. Cú Chulainn is taller and faster than any wooden coaster in the UK, although we don't have many, but even compared to its steel sisters over here it would rank at 11th in height and 7th in speed. At 3583 ft long, there are also only three coasters longer in the UK. But where it really leaves its mark is in sheer quality. In my opinion the UK is home to only two truly world class coasters: the wooden Megafobia at Oakwood, Wales and the legendary Nemesis at Alton Towers. For me, Cú Chulainn just about tops both of them. It's longer, smoother and more intense than its wooden brethren Megafobia, and though the airtime is less extreme there is a lot more of it. It’s a very different ride to Nemesis; Nemesis has inversions and some very high positive g force, but for me Cú Chulainn’s airtime provides the more enjoyable ride.
A slight worry is the odd moment of roughness; a diving turn to the left just before the overbanked turn beat into my back every time I rode, and the overbank itself has a very distinctive triple lurch. It is true that wooden coasters historically have had difficulty dealing with inversions, Gravity Group has only recently introduced them in fact, and this may be simply because of how close the element is to upside-down. The ride is in no way unpleasant however, it reaches a reasonably high level of intensity which it sustains throughout its entire circuit. A boy in front of me proclaimed that he was going to break the world record for riding it one hundred times in one day; indeed, each of the six times I rode there was a swarm of kids racing around for another go. This goes to show how a ride of this size can be suitable for all ages and provide a lot of re-rideability. Compared to some of the major UK rides (Nemesis Inferno, Swarm, Air, Colossus), Cú Chulainn has a lower height restriction (1.2m compared to 1.4m) but is far more re-rideable whilst also being quite a bit more intense. 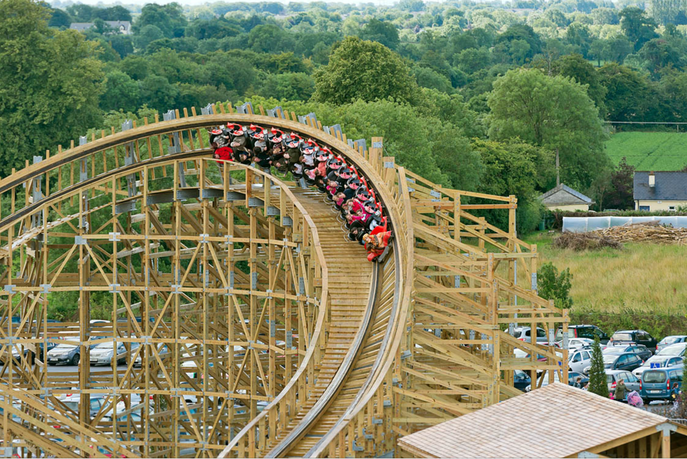 The near-inverting overbanked turn, on a much nicer day than when I visited Image © Justin Garvanovic
One of the obstacles to wooden coasters being built in the UK is supposedly their perceived unsafeness. This may be an even larger issue now after the tragic accident on The Smiler at Alton Towers last year; so the thinking may go: "If a modern steel coaster can injure people, why would I trust a rickety old coaster made of wood?" However, it was a relief to note that I heard not one mention of safety on and around the ride, neither from timid children nor worrisome parents. And bear in mind this would've been the first ever coaster for many people at the park. It's true that some of the wooden coasters at, say, Blackpool Pleasure Beach are looking a little worse for wear but they are nearing one hundred years old in some cases. This ride looks incredibly well built; the structure is just so dense and so precisely put together. It's hugely imposing but simultaneously not particularly intimidating; it simply looks like a lot of fun. And it is just that.