Trip Reports
Fantasy Island 30/06/14
Fantasy Island is one of the most enigmatic UK amusement parks. It seems like the owners expected great things when the park first opened in the mid nineties, but a lack of success led to things falling off the edge a little. Add to that the slightly unusual location in Lincolnshire (ok, probably just my London snobbery) and you have an underperforming park with a lot of unrealised potential.

My main concern was of course that the major coasters would not be operating, as is very often the case on quiet days or in high winds, but my worries were soon quelled as I saw both trains running once I reached the car park.

There’s no doubt in my mind that Fantasy Island is heavily inspired by Blackpool Pleasure Beach; opening just a year after Blackpool’s Big One did, the park clearly saw a gap on the East Coast market for a full scale seaside amusement park. Like Blackpool was until recently, it’s completely open, there are no walls or barriers and the stations for some of the rides are virtually on the streets. Anyone can come or go as they please, and if you want to ride the rides you simply buy an all day wristband. It seems the main attraction for locals is the 7 day outdoor market that winds around the huge ‘Piazza’ pyramid (which holds some indoor rides and an amusement arcade), the amount of complete rubbish in it is hilarious (there were unbranded sweets being sold by the kilo labelled only with ‘tastes like the green ones out of quality street’), but it’s still worth a look just for its vast scale.

Fantasy Island's skyline is arguably the most impressive in the UK
The park seemed very busy; the aforementioned market was bustling and every single restaurant and food stall was packed (it was lunch time to be fair), however the rides themselves were all but empty; there was literally no one in front of me in any of the queues. The amount of food on offer is incredible and obscene. It’s certainly not my place to comment on public health, but even as a fast food lover I was pretty disgusted. The only thing you can smell as you wander around is fried oil. You know something’s a little wrong when you’re in a theme park and you’re the odd one out walking, when everyone else is seated or in a mobility scooter. But anyway. If you do want to sample the food there are the regular franchises: McDonald’s, Burger King and Subway, and also the local food vans and cafes, serving fish and chips, Chinese, fry ups, barbeques and the like.

The first ride was Jubilee Odyssey. Odyssey is the flagship ride of the park, and the most notorious for lack of operation. It’s a Suspended Looping Coaster by Vekoma, a model which is one of the most common in the world. Vekoma are known for their off-the-shelf coasters; impressive looking rides with pre-designed layouts that are extremely popular since they eliminate the cost of designing a new layout. There are about thirty exact clones of the standard layout around the world, including Infusion at Blackpool. But they also design custom layouts (at extra cost of course), and that is the category into which Odyssey falls. It’s the same model as the standard SLCs, but with a completely different layout, and it’s much, much larger. The ride is very reminiscent of The Big One with its colossal red lift hill heading towards the ocean and its very steep first drop. At 167 ft tall and 63 mph it’s one of the largest inverted coasters on the planet, and one of the biggest coasters of any type in the UK. The ride starts with a tremendous drop which must hit almost 70 degrees. Even at the very front it lifts you well out of your seat with a healthy dose of airtime. The first inversion is a huge vertical loop; it’s forceful at the bottom and floaty at the very top. A cobra roll follows, and surprisingly at this point the ride is still very smooth. However it quickly goes downhill: there’s then a stall turn which smacks your head to the left, followed by a sidewinder inversion which is very shaky and then the final inversion is a corkscrew, always the worst element for roughness, which plants your head into the foam restraints continuously. They've just had the trains fully refurbished by Vekoma in the Netherlands, and although the track is not smooth, the trains were very comfortable when stationary. I dread to think of the pain the old trains caused. The second half of the ride is dull and painful, but the first half is exhilarating and more than makes up for it. The park were kind enough to allow me to shoot on-ride videos on the main coasters, and as you can see it’s a bumpy ride!
Whilst Odyssey carries the ‘Jubilee’ prefix because it opened in 2002, the year of the Queen’s Silver Jubilee, the other major coaster is even more inventively named: Millennium Coaster opened in...well actually in 1999, but I guess that’s when people were most excited about the turn of the century. Again it’s a Vekoma coaster, and again it’s a much larger variant of a standard model. This one is a sit down looping coaster, similar to Alton’s famous corkscrew, but it stands a whopping 150ft tall and reaches speeds of 56mph. The layout is strong on paper; there are two loops and a sidewinder inversion, but in reality it’s fairly dull. The drop is very shallow and although it picks up good speed there is no real thrill on it. For a Vekoma it is unbelievably smooth, certainly no bad thing, but it does add to the overall lack of character. The circuit is a huge square, surrounding the park’s central pyramid, which means there are multiple sections of completely flat track. The finale is decent however; it darts over the smaller rides with an s-bend and a reasonably powerful downward helix. It’s fun, it’s very reridable due to its smoothness, but it’s not really a patch on Odyssey in terms of intensity.
There are three other coasters; one is a regular Reverchon Spinning Mouse. It was actually my first, and was decent fun. It’s very jerky, with the typical Wild Mouse hairpins, and a couple of sharp drops. There’s one ridiculous airtime bump at the very end which hurls you into the lap bar, and overall it’s well worth a ride. Rhombus’s Rocket is the park’s intermediate coaster; it’s a powered ride reminiscent of Mack Mine Trains such as those found at Alton Towers and Chessington, and just like those rides it’s actually rather good, picking up some speed at the back of the train. The final coaster is a tiny indoor ride called Jellikins Coaster, which even I couldn’t bring myself to go on. 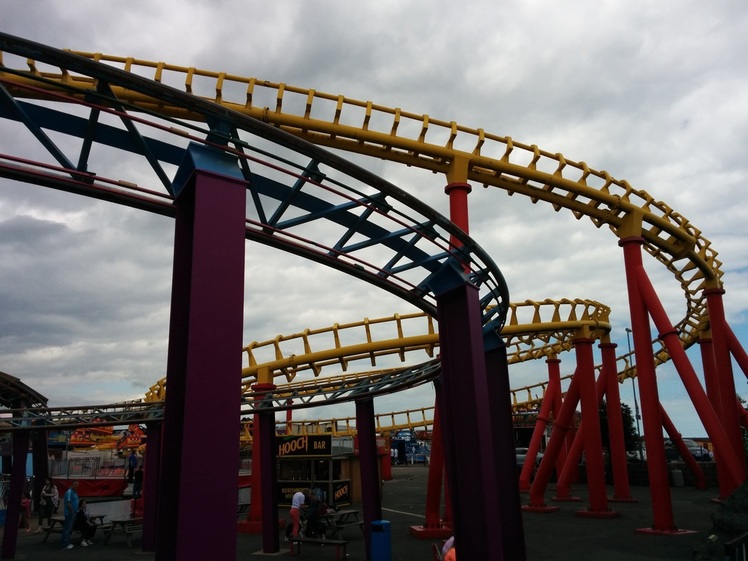 Millennium comes close to a number of rides, including Rhombus's Rocket here
The Flat Rides

Next up was The Beast. It’s a Top Scan ride by Dutch manufacturer Mondial; a very common model and the same as Samurai at Thorpe Park. Samurai is one of my favourite flat rides, and I had heard great things about this version. Although you might imagine that the two rides would run exactly the same, it’s not the case in the slightest. The ride has a number of operating modes, and whilst Samurai is run on a fairly low intensity setting, The Beast is apparently run on absolute maximum. I would not question that. Samurai is great because it twirls you around in the air like a rag doll; there are some moments of high g force when your carriage spins completely 360 degrees, but generally it’s a fast but fairly relaxing experience. Imagine then picking up the rag doll, smashing it violently against a wall until its head falls off and then burying it in the mud. That’s what the Beast does. It’s so much quicker, and the seats spin so much more frequently and it makes the ride five times better. The lateral forces border on uncomfortable as you are squashed into the side of your seat, but aside from that it’s still perfectly smooth. In terms of quality it’s the best ride in the park, and it helps that they run it on a very long ride cycle. 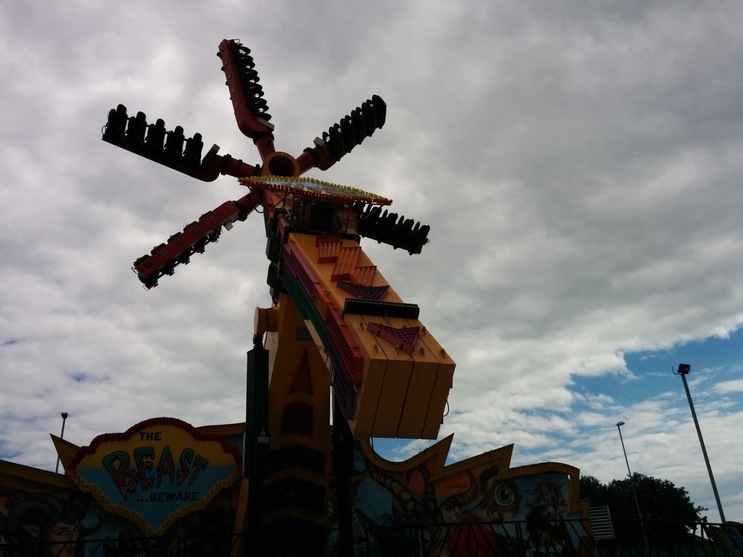 Beware: The Beast is not for the faint of heart
Fantasy Island was operating a ride rotation system; a few rides (the main coasters and Beast) were open all day nonstop, but the vast majority of rides were split into two; half would operate one hour and then the other half the next. It’s actually a pretty good system, the park saves on salary costs and as long as you plan ahead a little it doesn’t put the guests out at all, the queues are short enough that you can fit in seven or eight rides an hour and then just move on to the next set. One such ride was Amazing Confusion, a very impressive looking full pendulum ride. Like The Beast I had heard good reviews, the ride looks like a more intense version of a regular Frisbee ride, but it was actually very unenjoyable. The ride op first pinned me down with the restraint, and when he returned I assumed he was going to loosen it, but instead he told me it wasn’t down enough and so almost sliced both my legs off. The ride itself is very dull; as it is completely controlled there is no free swinging and so no airtime. It dangles you upside down at the top for a few seconds once or twice, which is very painful, and the ride is so long that I eventually just closed my eyes and tried to nap it out. 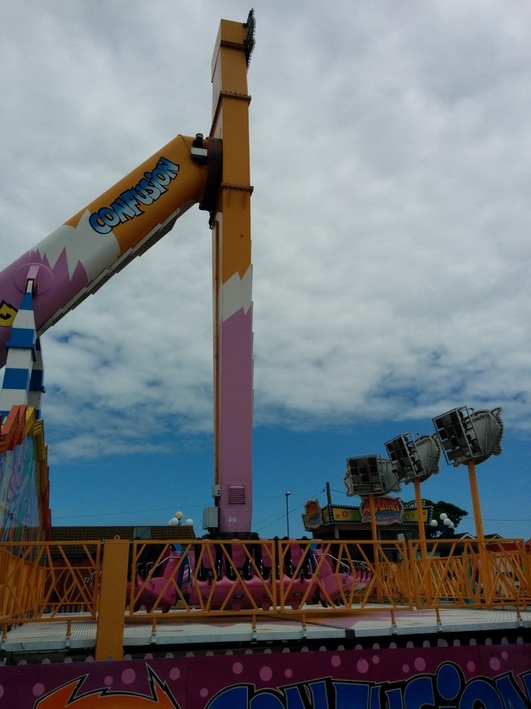 Amazing Confusion looks impressive, but it's not worth the pain
Finally was the S&S space shot, Volcano, the tallest ride in the park at 200ft. These rides are omnipresent; there are six or seven in the UK alone and over fifty around the world. I have never been impressed by them as they usually have weak launches and no dropping sensation. This was definitely one of the better ones that I’ve been on; although the drop was nonexistent, the launch did take me by surprise, however unlike the other big flat rides the ride cycle is very short.

Overall it’s a park that an enthusiast really can’t miss out on. The two coasters are freakishly big as far as UK rides go, and although neither is particularly excellent, they are both unique and were well worth the drive. It’s sad to see the rides with such short queues, especially on a day as nice as it was, although it is encouraging that the area on the whole is clearly thriving. I won’t be visiting again until they install a major new ride, but unfortunately I can’t really see that happening in the near future.