After a week of lounging around in the south of France it was time to knuckle down and get back to business, and we began in style at Disneyland Paris, staying at the Cape Cod inspired Newport Bay Club hotel. The last time I visited the resort was over 8 years before, when my enthusiasm was just beginning, and there was a lot of new stuff to do. Of course the trip encompassed both the main park and the studios, but for now I’ll just write about the studios as there were no new attractions in the main park to speak of.

We had 3 days across both parks, and so I was in no rush to do anything at any great pace. There was, however, one exception to that: Crush’s Coaster. The Maurer Söhne spinning coaster gets notoriously long queues and so I made sure we got to the park slightly before opening time. I was foiled. Upon getting to the ride’s entrance at 9.58 it had already accumulated an 80 minute queue. The ride is not advertised at all, nor is it prominent on the map, nor does it have a fast track so the reason it gets such consistently massive queues must be down to its poor capacity. Disney are known for building huge capacity rides; that’s why they go with Vekoma so often, and it’s also how they manage to handle the largest gate figures in the world with only a handful of attractions (See Epcot and Animal Kingdom in Florida). And so we wisely forwent Crush to explore the rest of the park. 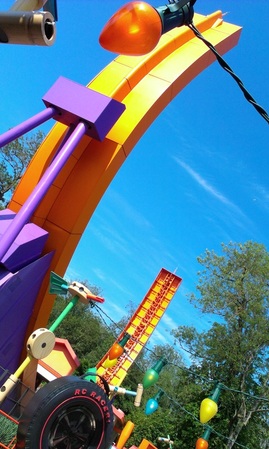 The Studios gets a pretty bad rap for being small and poorly laid out, with some less-than-impressive attractions. It is true that it’s small, the smallest of all the Disney Parks in fact (and also the least attended). The layout isn’t particularly imaginative either, but there’s not much more they could’ve done with the tiny footprint. But in terms of ride selection there really isn’t much to complain about. We started the day in Toy Story Playland, the most recent addition to the park, installed in 2010. Generally theming a Studios style park is a lot harder than a Magic Kingdom style park, but this land is executed excellently. The idea is that you are a toy, and thus everything around you is inflated on an epic scale. There’s the Slinky Dog ride, a Toy Soldiers parachute drop and even Barrels of Monkeys to take shelter under. The fences in the area are made of giant K’nex and the lights above are Christmas fairy lights. The centrepiece is the 86ft tall Intamin Halfpipe roller coaster, RC Racer, themed to the films’ green toy car of the same name. Once again the theming is excellent; the pathway of the queue is a Scalextric track, and mounted on the walls of the station they have massive sheets of plastic, from which you would pop out your toy car to assemble. The ride itself is no more intense than a swinging ship, it’s also a very short ride cycle, and so it makes for a very accessible family ride. 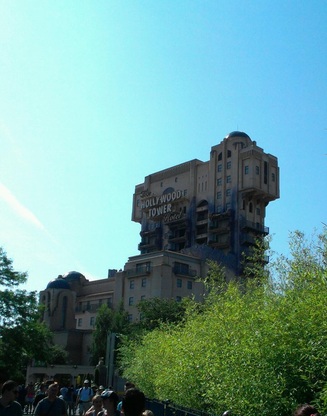 The stunning façade towers over everything
Tower of Terror

The main focus, the kingpin if you will, is without a doubt Tower of Terror. Sat in the centre of the park it towers over literally everything around it (you can still see it miles away from the resort) and it looks phenomenal. I am huge fan of the Florida version of the ride, and although that one is more extensive (The original, in Florida, includes a horizontal travelling section known as ‘the 5th dimension,’ and as I was expecting a simple drop ride I was taken aback when the carriage started to move forwards through the scenery!) I still had huge expectations for this version. The queue is undercover and eerie 1930’s music is played quietly in the background. You soon pass into the hotel lobby and then through to the library (there are 3 of them in order to keep up capacity) where Rod Serling (the host of the original Twilight Zone series) explains to you the ghostly disappearance of 5 hotel guests and employees. The boiler room serves as the loading platform for the ride and soon you are aboard the industrial looking service elevator. The one thing that disappointed a little in Florida was the lack of airtime on the drops, it is essentially a family ride after all, but this is the area in which the Parisian model wins hands down. After a couple of stunning scenes, including a good attempt at replicating the 5th dimension, you plunge downwards without warning. The drop sequence is both long and varied, you get about 5 drops over the course of it, and of course there is the stunning view from the top as the doors open. Over 6 rides I was lucky enough to get both the Library video and ride dialogue in both French and English. The first couple of times the cast were unenthusiastic, but by my last few goes they were really getting into their roles; their blend of comedy and macabre threats really adds to the experience. How Disney managed to pull off a 200ft horror themed drop tower in a family park is still, in my opinion, one of the most impressive feats in theme park history. The capacity is as impressive as anything; even with what looked like a sizable queue I waited no longer than 15 minutes. By my reckoning the ride can accommodate over 150 people inside the drop shafts at any one time (each elevator is double stacked, so there are effectively two rides doing the same thing one on top of the other, and there are 3 shafts), and the pacing of the library makes the queuing feel even shorter.

We then took a bit of time to do some of the original attractions. Armageddon, a special effects stage themed to the 1998 disaster movie, is still very impressive, although the intro by the cast member is cheesy and a little embarrassing. The studio tour is by far the worst attraction in the park; attempts to replicate Universal Hollywood’s stunning backlot tour have never been successful, mainly because none of the copies have ever been built on actual film studios. It’s short, all the films are massively dated; it’s pretty much just Pearl Harbour, Armageddon and Reign of Fire (who even saw that?) and there is nothing remotely interactive other than the Catastrophe Canyon section, which I have to say is very cool, and the audio on the screens wasn’t working so all I got from it was Jeremy Irons making a fool of himself. It really needs a massive upgrade, or simply to be taken out, it covers a lot of ground with little benefit (Cars Land yes please). 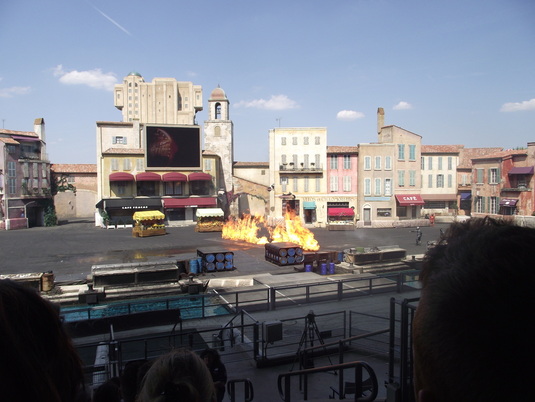 Moteurs, Action is seriously hot! Image © Zoe E. Wiseman
We took in the Moteurs, Action show, which was as thrilling as ever, and then headed round to Rock ‘n’ Roller Coaster, which had just been repaired. I loved the ride when I was 10, but the Floridian version disappointed me, so I didn’t expect too much. What took me by surprise was just how smooth it is; Space Mountain next door is painful to say the least, and there’s really little difference between the two, except that Rock ‘n’ Roller Coaster is a good bit faster. The launch didn’t turn my stomach like I remembered, but it still feels very, very quick. Overall it’s the second best roller coaster in either park (Big Thunder Mountain is just so much fun), and a third place in terms of attractions, both coasters behind Tower of Terror.

The next day we got to the park a good half hour before opening, and despite Crush not even being open yet there was already a queue winding from the entrance. When the ride did open it took only another 20 minutes before we were onboard. The theming is fairly sparse, but what they do have is well done; the main bit is the pre-ride section where you interact with an animated Nemo and Crush and travel through a shipwreck. Sonic Spinball (Alton Towers) is a guilty pleasure of mine, and so I expected great things. Despite Crush being a smaller model, it still delivers solid thrills and a few pops of airtime. The highlight is the long first drop, and although the ride time is pretty brief you can see why it’s so popular 6 years after opening.

It’s true, the park is a little unloved, and patches of it are not up to Disney standards. But some parts really are, and if next year’s Ratatouille dark ride turns out to be anything like Mystic Manor (Hong Kong Disneyland), and it looks like it might do, this malnourished park could blossom into one of the world’s best; it certainly has the potential.