Alton Towers hadn’t installed an attraction since 2010, and since that was Th13teen, the disappointingly family-oriented (despite being heavily thrill-marketed) Intamin freefall coaster, many would argue that nothing has come out of the Towers that is truly worthy of their UK leading status since 2005, when Rita debuted. So understandably from very early on there was some considerable hype surrounding Alton’s mysterious new attraction.

Black Hole was one of the most beloved roller coasters at the resort, but after 23 successful seasons of operation it was finally decided that it would be closed down; it was assumed at the time that was mainly due to ever increasing maintenance costs. (The legendary company who built Black Hole, Schwarzkopf, went defunct in 2001, and as a result any parts or repairs would have to be specially made by other companies at elevated costs) But the rumour mill started churning in relation to what might fill the empty tent left behind. Black Hole was by no means a large roller coaster and so it was assumed that if there were to be a replacement it would be a flat ride (a la Enterprise and Submission) or possibly a small coaster.

Intense speculation began pretty much as soon as Th13teen opened. The initial rumours were unsurprisingly for a B&M Wing Rider, as that was what Thorpe Park were constructing for the 2012 season, with the inevitable hopeful suggestion that the ride could be the first B&M 4-D coaster. The candidates for where the ride might be built within the park seemed to be Gloomy Wood, where there had been rumours for Vekoma BoosterBike a few years before, and Merry England, as there has been little addition to that area in the past decade or so other than the retheme of the flume. So when the plans went online on a local council planning website most people were shocked to say the least.

The plans were for a multi-looping sit down roller coaster to be located, you guessed it, on top of the former Black Hole site, opposite the park’s B&M Diving Machine, Oblivion. Alton have a serious problem when it comes to planning new installations in that they are not allowed to build above tree height, and they always manage to come up with an inventive way of building thrilling rides whilst sticking to this regulation; building in a manmade pit (Nemesis), digging 100ft hole to put the drop in (Oblivion) and sticking a 60mph launch on it (Rita). But the new plans may have trumped them all; they would squeeze what would be comfortably the longest ride at the resort into a seemingly far too narrow ravine. With the plans being examined closely, and what appeared to be a layout with 8 inversions and 2 lift hills, one vertical, speculation quickly turned to manufacturers. From the schematic the track structure appeared to resemble Maurer Söhne, but because of the vertical lift many also included Gerstlauer in the discussion.

Months of bored enthusiasts taking pictures of mud followed and eventually vertical construction started with what looked like Gerstlauer track began to be installed and except for the inevitable hope that “it might be an Intamin!” (Intamin and Gerstlauer use tri-track which are virtually indentical) it was a done deal. A lot of UK enthusiasts aren’t particularly keen on Gerstlauer, mainly because of how rough Saw (Thorpe Park) is, but they have plenty of other rides around the world which are very highly regarded so it was still very promising. Aside from delays due to snow early construction was uneventful, except for the fact that what was going up was not exactly what was on the plans...From early on there were inversions that weren’t on the plans at all, and when Alton announced that the new ride would have a world’s first, many people anticipated Colossus’ record of 10 inversions was going to fall. True to form the ride took shape, loops and twists everywhere, with the most outrageous being the two zero-g rolls instead of main drops.

The enigmatic theme was a part of the ride that was still baffling everyone, especially the centre piece, seen first on the initial plans, which appeared to be a giant spider. Alton finally revealed the name, The Smiler, and also that guests would be treated to an inoculation of sorts; a trip of physical and mental conditioning, which they dubbed “marmalisation,” and which would lead to inevitable happiness and, of course, permanent, twisted smiling. The spider in the plans was to be known as the Marmaliser and each leg was home to some method of smiley torture; needles, laughing gas, ticklers, spinning plates, flashing lights and tickling rods. Bizarrely Alton still didn’t announce that it would break the inversion record even though by now 13 inversions could be seen, and it was believed there was another inside the station building, bringing the record up to a mighty 14. Because of Alton’s intense secrecy many believed they were still concealing some kind of new element, in the style of Th13teen’s vertical drop, that would spin the train around like a washing machine, although some were disappointed this never materialised with hindsight I think it’s safe to say it’s better without (if not only for reliability reasons). 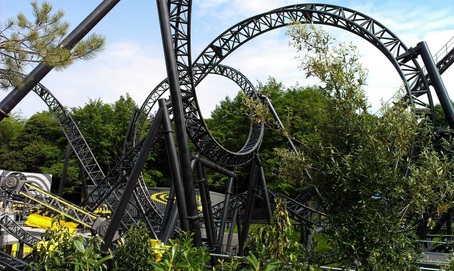 Alton couldn’t quite get it open by the initial opening date, but it opened 8 days later to rave reviews and colossal queue times. I headed up to the towers a couple of weeks later and luckily my trip was sandwiched between the two main periods of down time (so far), the early on train valleying situations and the more recent track splitting. As we were staying in the hotel we had early access to the park, and although Smiler wasn’t opening until the regular opening time we forwent all other attractions to get to the X Sector and begin our marathon queue. The first thing you notice is, well, a lot of inversions. This thing is impressive. The area it’s been crammed into still looks tiny, and yet the ride itself looks massive. The music is very catchy and the circular screen on the Marmaliser has a good 10 minute cycle of entertaining video. Once the ride had actually opened we had barely queue time at all, the longest bit was actually walking through miles and miles of queue line as fast as we could. The queue is in the regular cattle-pen format, but being directly beneath the ride there are some stunning photo opportunities. Eventually you push past some hospital style plastic sheet doors and into an effect room. The room is almost completely dark save for the projections on the walls. I couldn’t quite tell what was going on, but I’m fairly sure there were various geometric shapes jutting out of the walls, and with the projections cast over them it made for an incredible series of optical illusions. The “is it coming towards you/away from you?” and “is it really moving?” kind of thing. It’s not very complex but it’s very effective and entertaining. A bit more winding around takes you to the loading room, painted a clinical white with what look like medical lamps hanging from the ceiling. The trains seem more comfortable than the shorter Eurofighter ones, and soon we were off. 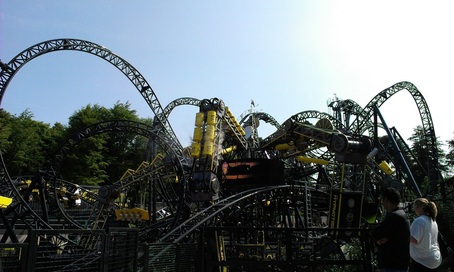 Can you count the inversions?
The Ride

It’s a plunge into misty darkness straight away and then into a rapid inline twist. It looks like it might be a bit jerky, but it’s actually all taken very smoothly. After the first lift, the 45 degree one, you dip down and around, with an incredible view of the park, and are sent head over heels into the zero-g drop element. The first large double inversion is the Norwegian loop (effectively back-to-back diving loops) and you then head into the first airtime hill, which provides a healthy dose of negative g force. Then comes the second major element, the batwing. The final element of the first half is a corkscrew, which is the first of three moments where you experience a little roughness. The brakes slam on and we’re up the vertical lift. The drop inversion is almost identical to the one in the first half, but the similarities between the two halves end there. The ride seems to slow dramatically into the sea serpent roll, but upon exit the train accelerates dramatically and the second airtime hill is really, really fun; the negative g is noticeably greater than on the first. The cobra roll provides the only properly painful moment at the exit, but it’s quickly forgotten as the fun, slightly shaky, double inline twist provides a strong finale. The first thing I thought was a simple wow; it takes a moment to get your breath back. I was very surprised I didn’t have any sort of headache; it’s such a long ride and I anticipated the endless inversions would take their toll, but instead it manages not to be overly forceful as to cause discomfort. The variation in elements is also excellent; many complain about the 5 consecutive heartline twists at the end of Colossus, but here nothing feels repetitive. Considering the ride is some 4000ft long, having only 3 patches of roughness is easily forgiven.

I think it’s very safe to say Alton Towers have a winner on their hands. Yes, it’s been plagued by downtime and they’ve got some bad press for it, but the attraction as a whole is brilliant; the coaster is solid and interesting and the theming is original and well executed. It seems a very hard act to follow for UK parks in what is, if they can keep it running, the best addition to Alton Towers since Nemesis.