I don’t like to write bad things about amusement parks; I’m an enthusiast after all, and this means I should be enthusiastic, but sometimes that’s just not possible. I’m not sure exactly how Tibidabo came to be on my radar, I assume it was when they built their most recent attraction, Muntanya Russa, in 2008, but since my first, and previous, visit to Barcelona in 2011 I’d wanted to visit to the uniquely located park. This time I’d done my research, found out exactly how to get to there, and managed to convince my less enthusiastic friends that roller coasters are a great alternative to a lie in.

After checking the park’s terms and conditions I learned that if I wanted to video on rides I would have to email their commercial department in advance, which I did. When we got to Barcelona they still had not replied, and thus I pushed the trip back, with no response from them, until we had little time left and had to visit. 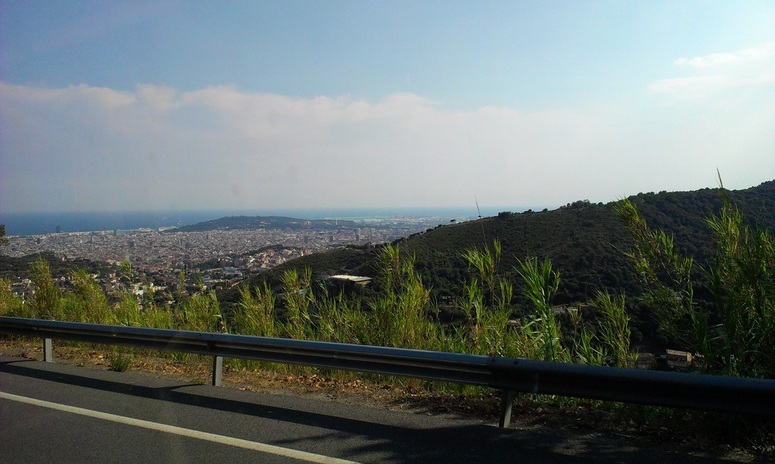 The near-empty shuttle bus gave some awesome views of Barcelona
The journey to the park is long but easy; there’s a direct shuttle bus from Plaça de Catalunya (Barca’s main square) which costs just €2.95. The roads wind around the mountain itself, providing epic views and demonstrating just how massive the city is, eventually dumping you on what appears to be any old Spanish road. There are no signposts and so we waited behind the one other family on the bus, who lead us towards the entrance. Initially the park is beautiful (although it’s not really the park, just the surrounding mountain area) the steep steps of the pathway are isolated and surrounded by trees, but quickly we got into regular territory; a hideous parade float covered in various rip-off Disney characters. There is no actual entrance, which is frustrating because you've already gone past some of the attractions before you have a chance to buy a ticket. We soon worked out that this top tier is the SkyWalk, and there is a large plaza in the centre of it. Rides on the SkyWalk are pay-per-ride, and there are only a few of them; an old-fashioned aeroplane ride over the edge of the mountain and an odd observation-arm ride being the two most popular. I only really wanted to ride Muntanya Russa, but as it’s on the lowest tier you have to buy an all-inclusive wristband for €28.50. This is more than it costs to get into Oakwood, Drayton Manor and even Walibi Holland, and it’s a complete ripoff. One of my friends was pick pocketed earlier on our trip and even that was better value for money. 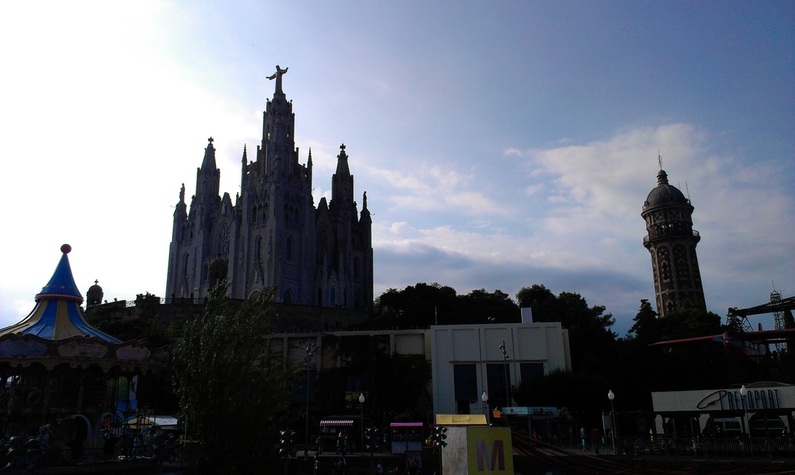 The church, Temple de Sagrat Cor, is stunning and towers over the main plaza
I headed to the customer service office to enquire about my video email. For some reason the lady needed to take my email address down, and 15 minutes later she came back asking me to visit on another day. I told her that we were leaving the next day, and she went away for another 10 minutes before telling me that it was not possible. I’m not going to bother ranting about the ridiculousness of it all, but I was a little miffed to say the least. The lack of signposts struck again as we could see no way of getting down the levels, until we found an elevator. After waiting for 10 minutes or so (yes, for elevators, not for rides) we were told we couldn’t fit (mainly because the family ahead of us had two empty strollers) and were told to go around and walk down. So we walked all the way back, past customer service, past the ticket booth and into the swarms and swarms of people. 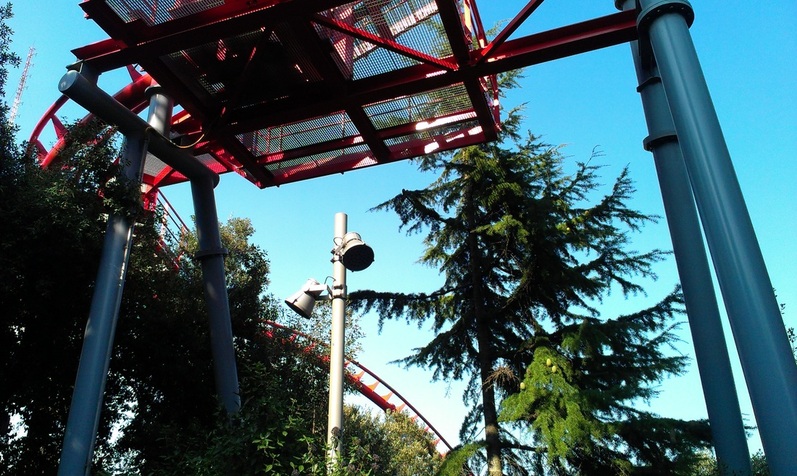 You can just catch glimpse of Muntanya Russa's big drop from the upper level
I expected the place to be a tourist trap, but in fact I didn’t notice a single other group who weren’t Spanish speaking. The guests were awful; queue jumping happened everywhere, even where there were tiny queues. One person held the queue for a family of about 15, and at one point a couple of brattish kids simply walked in front of us just to gain one place (luckily one tied his shoelace just before we boarded the ride, so I managed to shove him over and get in front again). The park felt incredibly busy, but actually on the whole queue times were very reasonable; I think this is partially because of the size of the park, it’s so small it feels packed, and because the majority of guests were queuing for the SkyWalk rides rather than those on lower levels.

Muntanya Russa (which literally means Russian Mountain, the phrase that many languages use instead of ‘roller coaster’) is a Vekoma roller coaster which defies regular definition; it’s a non-inverting ride suitable for smaller children, but it also features a large 100ft drop which also appeals to the older section of the market. Add on top of that that it’s built onto the side of the mountain and you get an intimidating but not-too-extreme attraction. Despite being so exposed, the ride is actually fairly hidden until you are in the station, which is not great for selling the ride to potential guests, but did help me get my terrified friend on it. The little lapbars click down and soon you are off and up the steep lift hill, which hugs the side of the mountain. You get just a moment to admire the epic view before being hurtled down the drop. There’s a little bit of airtime, nothing to write home about, but there’s enough to make it very enjoyable. You curve suddenly to the left, pulling a decent g-force, and then proceed to cycle through two s-bends, which are fun and a little jerky, and then a downwards helix. You then crawl over an ‘airtime’ hill (there is no airtime at all) and through two more downwards helices. It’s a decent length ride and the drop is fun, but the rest of the ride is a little insipid. I was a little bit disappointed, I guess because of the other annoyances of the day, but it is a decent attraction. As the main, and almost only, roller coaster it’s lacking, but it is enjoyable. 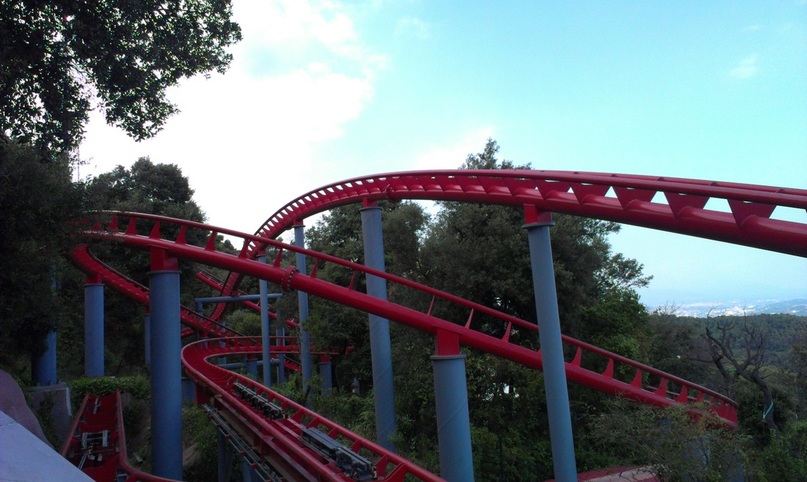 Muntanya Russa packs nearly 2500ft of track into a very small space; here's the slow airtime hill
We then attempted to get on the log flume, but were met with a simple ‘no’ when we tried to walk towards it, I can only assume that it was broken down, or perhaps we had to email in advance if we wanted to ride?

We then headed right to the other end of the lowest tier in order to get on the only other thrill ride, Huracan, a Huss Top Spin. I usually wouldn’t bother with a Top Spin, I skipped Excalibur the week before in Walibi Holland, but I felt I should get my money’s worth. It was one of the better ones I’ve been on, although it was really quite painful; it begins with the carriage locked in position, brutally holding you upside down from your chest, before forcefully swinging the carriage back and forth. The water jets were unsurprisingly broken. We took one final trip on Muntanya Russa, which never had more than a 10 minute queue, this time at the very back. The back is certainly the best seat; it’s more intense and the negative g-force is amplified considerably on the drop. It’s frustrating that you can’t queue for a specific seat because towards the front the ride is comparatively lame. 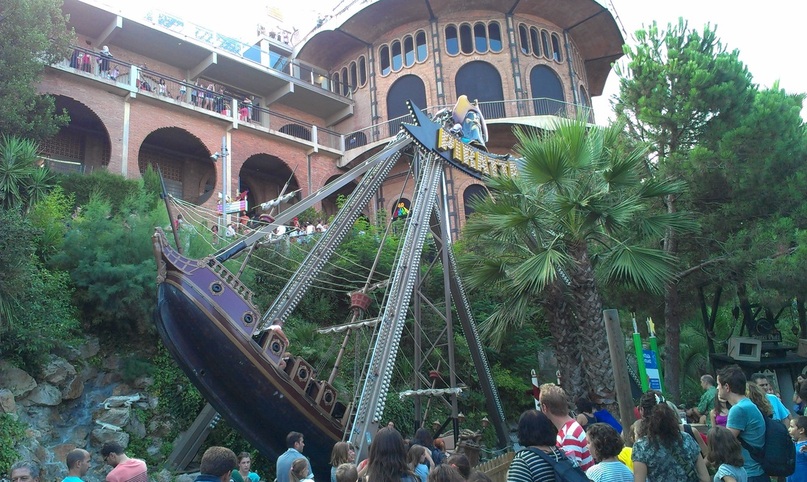 The only other ride on the lowest tier is this Pirate Ship
With the only remaining ride of note being a regular pirate ship, and since by this time we were all very hot, and getting increasingly irritated by small children, we headed back up to the higher storeys. The only attraction we missed a chance on was what appeared to be a walk-through horror attraction called Krüeger Hotel; I had no prior knowledge of it, and whatever it was, it was crammed into a very small space, but the queue line theming looked quite good. However, the queue was about 45 minutes and so we opted out and headed home.

Overall it was a thoroughly disappointing day; the signposting is bad, the customer service is bad, the layout is bad (but of course it would be being on the side of a mountain), the ride selection is bad and the price is terrible. We had contemplated going to PortAventura instead beforehand, but decided against it as the journey is 60 minutes longer. With hindsight this was definitely the wrong decision; it may be a trek but PortAventura is a fantastic park with some world-class rides, whereas Tibidabo is a complete joke.