Day 2 called for a step up in size, but still another fairly small park in the grand scheme of the trip. Dorney Park, in Allentown, Pennsylvania, is owned by Cedar Fair. Many people will have heard of Six Flags, one of the major American amusement park chains, and Cedar Fair is effectively their main rival. The flagship park is Cedar Point, in Ohio, there is a then a tier of what I would call ‘major’ parks and then another tier of ‘minor’ parks. Compared to UK parks, however, all of their properties (just like with Six Flags) are very impressive. Dorney slots into the top of the ‘minor’ tier, but as I say, it boasts a ride line up that easily rivals the top UK parks.

After another hour’s drive, the beautiful sight of painted metal skyline came into view. I had always imagined the park as being massive, but everything is squeezed into what is actually a fairly compact footprint, making the view even more impressive. As I feared, being a Sunday, the car park was really busy. But bizarrely as it turned out the vast majority of people were actually heading for the adjoining water park; Wildwater Kingdom. This was to be a running theme of the week. I am personally not a big fan of water parks as I don’t really like swimming and the rides simply cannot be very intense for safety reasons, but for some reasons the Americans flock to these things, even on a very overcast day as it was. I wasn't complaining though, as it left the park almost dead. I skipped the busier rides right by the entrance and headed to the back corner of the park.

Possessed and Steel Force: Not an unpleasant view
Possessed

First up was Possessed, my first Impulse coaster, built by Intamin of Switzerland. There are about ten of these rides around the World, all almost identical, and they’re very visually impressive. They’re inverted coasters, meaning the train hangs beneath the track, and they’re what’s known as shuttle coasters, meaning they don’t complete a full circuit. Rather, they go to one end of the track, before proceeding in reverse back to the station. In this case the train blasts out of the station at 70mph via a magnetic launch, before going up a twisting 180ft vertical spire. It then falls back down, being accelerated through the station by more magnets and up a straight vertical spire, in reverse of course, at the other end before falling back to earth. It repeats this for a bit until coming to rest in the station. Think of it like a Pirate Ship ride on steroids. Despite the lack of any lateral force it’s actually quite rough, but the launches are fun and kicking the sky 180ft in the air was a novel experience. I can see why these rides were popular for a while, but they don’t really have enough substance to make a park on their own. 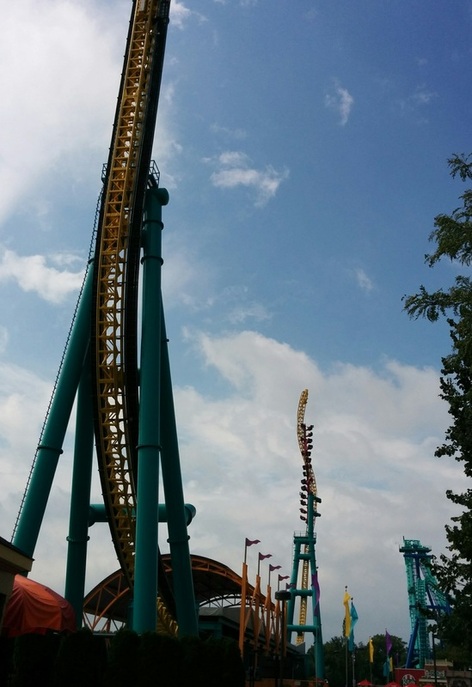 Even at 180ft, Possessed isn't the tallest coaster in the park
Steel Force

Due to an incident on Stinger, the park’s inverted boomerang coaster, the ride has been closed for a couple of months, so I had to forgo that, and instead got in the queue for Dorney’s biggest ride: Steel Force. In the 90s people’s tastes in roller coasters changed dramatically. The 80s was full of experimentation with steel roller coasters, which were fairly new at the time, especially on such a large scale, and generally involved building them taller and taller, and putting in as many inversions as possible. By the 90s people realised that actually excessive inverting isn’t all that fun, and what is more fun is smooth, swooping drops and airtime hills. Thus the megacoaster was born. Morgan, an American manufacturer, was one of the first to pioneer the model, and Steel Force is an example of this, having opened in 1997. Its colossal red track is one of the longest in the World at 5600ft, snaking right across the back of the park, and its 205ft first drop hits a top speed of 75mph. Despite the hefty stats the ride doesn't really impress. The track seems poorly profiled; it’s rather rough, and whilst it looks like it should deliver a healthy dose of negative G force, it’s all rather dull. The turn around mid-ride pulls some nice positive Gs, but the bunny hops at the end are very disappointing. Add to this a cramped and uncomfortable train and you have a distinctly mediocre ride. It’s a shame considering how fantastic it looks, but its age really shows. It simply doesn't compare to the more recent megacoasters that it has inspired. 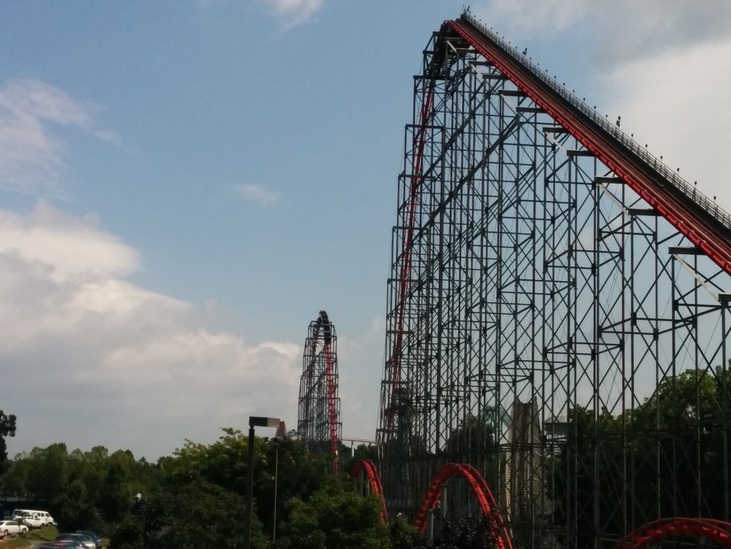 Steel Force looks absolutely awesome, but it doesn't quite deliver
Steel Force towers imperiously over Thunderhawk, which having opened in 1924 is the 10th oldest operating coaster in the World. It certainly doesn’t seem that old, and honestly when I just checked that I stat I did a proper a double take. It’s a reasonably big wooden coaster, and despite being pretty uncomfortable it’s actually quite a lot of fun. 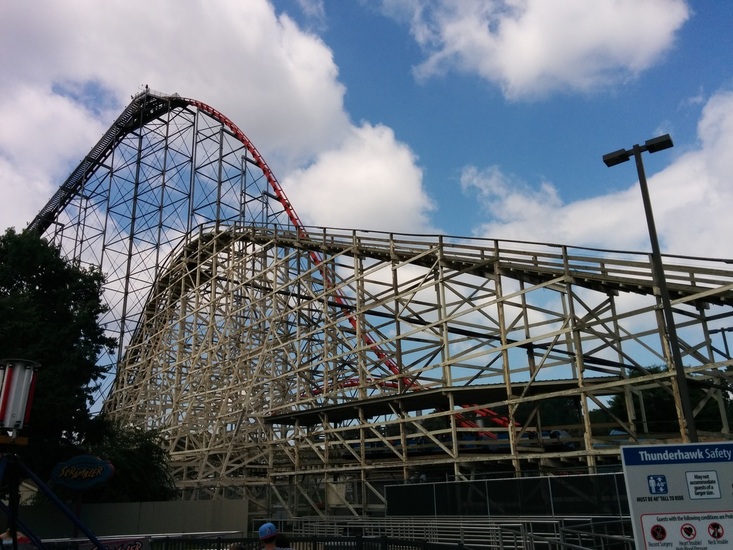 Me - "How old are you? Late thirties? Early Forties?" Thunderhawk - "Oh you!"
The Food

Having guilted out and been to the gym in the morning, and having had a healthy breakfast, I was very much ready for Day 2’s eating plan. The agenda was small, but highly anticipated. The first was the raved about Chickie’s and Pete’s. Officially it claims to be a ‘Crab House and Sports Bar’ and has 37 locations across America. In a theme park there isn’t really room for the Sports Bar bit, so it was more of just a fast food crab house (which is an odd concept in itself for a Brit). My interest wasn’t in the crab, however tasty; rather it was in the well known ‘Crab Fries’. From my research these seemed to be crinkle cut fries with a lot of paprika style seasoning - think Nando’s Peri Peri chips - but when I got to the counter and noticed the price was $9 I realised I had underestimated the awesome might of American food (it wouldn’t be the last time). They were delicious, with just the right amount of seasoning, and more than enough for lunch on their own. 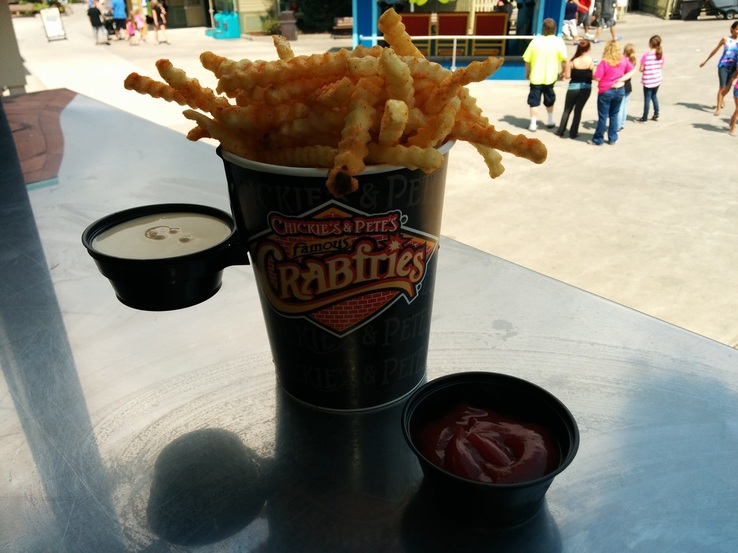 $9 of fries. So big they have their own cupholder
Next up was what can only be described as pure gluttony as I wasn’t in the slightest bit hungry, but it was something I felt a duty to try. Perhaps they would’ve been offended if I didn’t? Yes, let’s go with that. Anyway. Deep fried Oreos. Exactly what it sounds like; they take an unhealthy treat, dip it in liquid batter and plunge into a reservoir of boiling fat. Then sprinkle powdered sugar all over the top. The biscuit goes all soft and gooey and they were completely delicious. I only managed two out of the four before I could feel the radius of my arteries decreasing significantly. 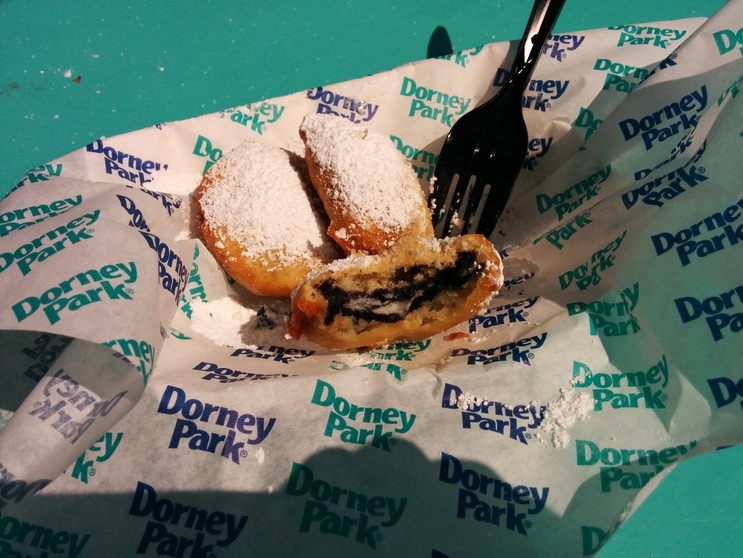 I thought a portion of only four oreos was a little stingy, I was wrong
Hydra

Back in 1989 Dorney Park opened Hercules, a wooden roller coaster with the largest drop in the World, at 150ft. The ride hugged the terrain around the back of the park and looked visually stunning; however it was notoriously rough and even gained the genius nickname “Hurts your knees.” The park cut their losses with the infamous ride and made best use of precious real estate by tearing it down and cleverly expanding on the Herculean mythology. The idea is that the Hydra, whom Hercules originally defeated as the second of his twelve labours, has returned and destroyed the hero as revenge.

The new ride itself is a floorless coaster built by B&M and, like its predecessor, it follows the land’s topography closely. These rides are typically very standard; a big drop is followed by a big loop, and then a series of standard inversions, but Hydra’s cramped hilltop location means it has to be far more inventive. Many people dislike it for this reason, as it doesn’t ever quite get up to the speeds its larger relatives do, but I thought the innovation was refreshing and the interaction with its own track provides some great near-miss moments. It’s the parks strongest ride in my opinion, only by a fractional margin, and unsurprisingly pulled the longest queues. 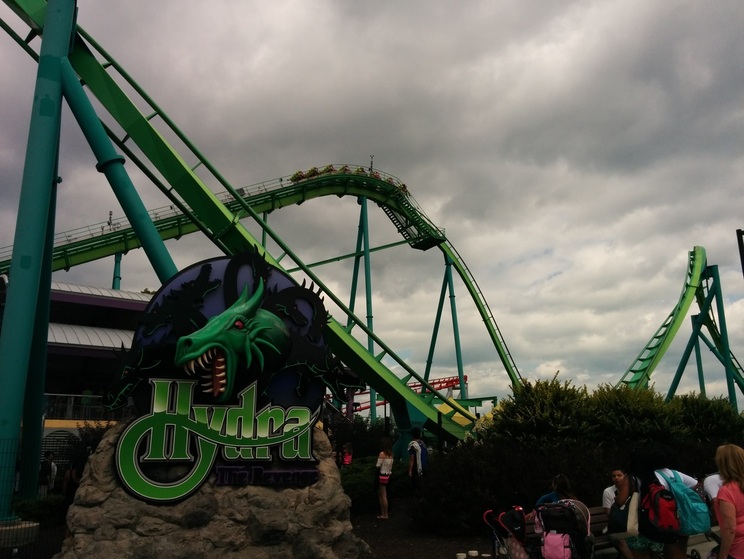 The park’s unprecedented success with Steel Force was followed by another very well received coaster, Talon. A B&M inverted coaster, the same model as Nemesis and Nemesis Inferno here in the UK, is one of the safest options a park can go for since they are so consistently good, but personally I'm not as universally keen on them as most people: I have a pile of ‘very good’ ones, and a pile of ‘distinctly average’ ones. Unfortunately Talon didn't make the very good pile, although it is certainly towards the top of the average. It’s just rather predictable; it follows the very generic drop - loop - several inversions model and does without inducing much force. That being said it was fun, and like everything else in the parks it’s one part of a solid line up, and I'd place it just behind Hydra. 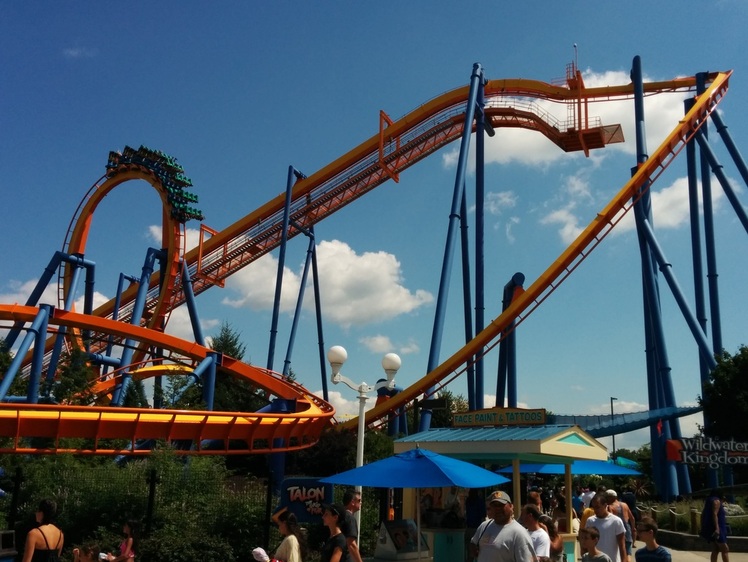 Talon: Bright and beautiful but fairly generic
The final ride of the day was the only ride of the entire trip that legitimately scared me: Demon Drop, one of the few remaining ‘First Generation Freefalls’ built by Intamin of Switzerland. As the name suggest, these were the very first drop towers, and since they pre-dated magnetic brakes they have a very interesting way of operating. You begin sitting upright in a single row of four in what looks like a huge throne. The single row is pulled backwards out of the station before locking into a vertical lift. You are then raised by an elevator 131ft, before being shunted forward about 5ft, engaging with the drop track. You then freefall, but rather than going straight down all the way, the vertical section curves out like a regular roller coaster and you come to rest on your back (regular friction brakes slow the car down; they wouldn't provide enough force to stop a vertically dropping car). A backwards, downwards conveyor belt then takes you head first down a level and out of the way of the dropping cars, you are tilted back to upright and reverse back into the station. The thing looks like a huge torture machine (hint hint London Dungeon) and the whole idea of falling 131ft and landing on my back didn't sound entirely appealing. It is, however, a phenomenal ride. The whole anticipation is stomach turning, and the drop itself is really strong. It’s a shame these things are a dying breed, but hopefully Dorney can maintain this one well. 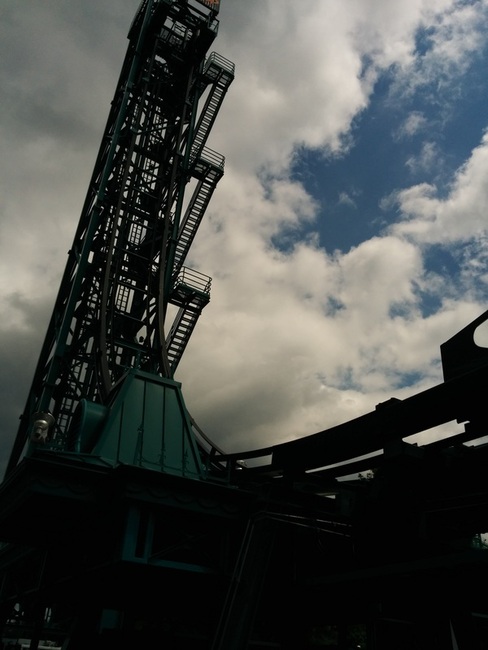 This towering contraption is nothing short of demonic, and it's a lot of fun too
With queues as short as they were I needed only three or four hours to completely clean up all of the rides, and I really enjoyed my day. However, it has to be said that the parks lacks a stand out coaster. When you have a major park like this, that has such a strong line up on paper yet their best rides are fairly average when compared to others of the same model around the World, it’s clear to see there needs to be serious investment in a flagship attraction. Rumours are abound that Mantis may be removed from Cedar Point this year and relocated to Dorney, but this won’t help the problem; it’s generally very poorly regarded and would sit in exactly the same category as their other rides (plus it’s a fairly unlikely rumour). Considering their only wooden ride is nearing its centenary, we can only pray that Cedar Fair pick up on this and give their neglected child some much deserved nourishment.